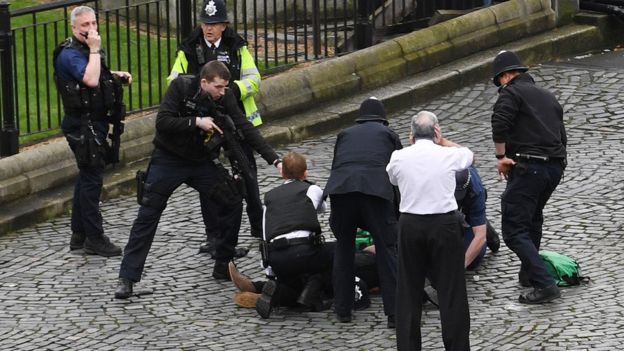 Photo BBC
Two people have died after a terror incident that saw a police officer stabbed and as many as a dozen people run over outside London's Parliament building on Wednesday.
London police confirmed there are a "number of casualties, including police officers."
Scotland Yard Commander BJ Harrington told reporters there are multiple injuries, including police officers, but said authorities "cannot confirm numbers or the nature of these injuries."
"We received a number of different reports which included a person in the river, a car in collision with pedestrians and aman armed with a knife," he added.
He said a full counter-terrorism investigation is underway.
Colleen Anderson of St Thomas' Hospital said a woman died after a vehicle apparently hit pedestrians on Westminster Bridge, near Parliament, according to the Press Association.
Details on the second death are unavailable. Anderson said:
"There were people across the bridge.
There were some with minor injuries, some catastrophic.
Some had injuries they could walk away from or who have life-changing injuries."
An alleged assailant was also shot by police after stabbing the officer.
It is unclear if there were others involved in the attack.
Sky News reported a woman was pulled alive from River Thames.
London police were called to the Parliament building at around 2:40 p.m. local time (10:40 a.m. EST) after reports of a vehicle crashing into a crowd at Westminster Bridge near Britain's parliament. Witnesses say the alleged assailant then stabbed a police officer before he was shot down.
The assailant's status is unclear.
The assailant -- who looked to be in his 30s or 40s -- was carrying a seven to eight-inch knife, witnesses told Sky News.
It is unclear if the person shot by police and the driver are the same person.
The former Polish foreign minister Radoslaw Sikorski posted a video on Twitter that seems to show people lying injured in the road on Westminster Bridge. Sikorski, a senior fellow at the Harvard Centre for European Studies, says he saw at least five people lying on the ground after being "mown down" by a car. Sikorski told the BBC he "heard what I thought what I thought was just a collision and then I looked through the window of the taxi and someone down, obviously in great distress. "Then I saw a second person down, and I started filming, then I saw three more people down, one of them bleeding profusely."
A woman on a bus crossing the bridge at the time of the incident told Sky News, "I saw a car go out of control and go into pedestrians on the bridge ... We saw people lying on the floor, injured obviously.
I saw 10 people maybe." Witness Rick Longley told the Press Association that he saw a man stab a policeman outside Britain's Parliament.
"We were just walking up to the station and there was a loud bang and a guy, someone, crashed a car and took some pedestrians out," he said.
"They were just laying there and then the whole crowd just surged around the corner by the gates just opposite Big Ben.
"A guy came past my right shoulder with a big knife and just started plunging it into the policeman. "I have never seen anything like that.
I just can't believe what I just saw." Prime Minister Theresa May was rushed to safety after the attack. White House press secretary Sean Spicer said on Twitter that President Trump had been briefed on the ongoing situation.
Trump himself said during a brief appearance Wednesday before reporters at the White House that he was just getting the news.
He called it "big news." The U.S. State Department says it is closely monitoring the incident and urged Americans in London to avoid the area.
Spokesman Mark Toner said Wednesday: "We stand ready to assist in any way the U.K. authorities would find helpful."
He added that the U.S. Embassy in London is closely following the news and stands ready to help any affected Americans.
He said: "Our hearts go out to those affected."
BBC News reports police believe there is a suspect vehicle outside parliament, people being evacuated from the area.
Witnesses on scene said about a dozen people were injured on the Westminster Bridge.
Another witness told Sky News that there was an "almighty crash" as a vehicle hit the railings outside Parliament.
A witness told Sky News: "Someone rushed through, attacked a policeman... he appeared to be carrying a knife.
We heard lots of gunfire." Witness Jayne Wilkinson told the Telegraph: "We were taking photos of Big Ben and we saw all the people running towards us, and then there was an Asian guy in about his 40s carrying a knife about seven or eight inches long."
Commons speaker John Bercow suspended the session as police responded to an incident. George Eaton, a journalist with the New Statesman, said that from the window of Parliament's Press Gallery, he saw police shoot a man who charged at officers.
"A large crowd was seen fleeing the man before he entered the parliamentary estate," he wrote on the publication's website.
"After several officers evaded him he was swiftly shot by armed police."